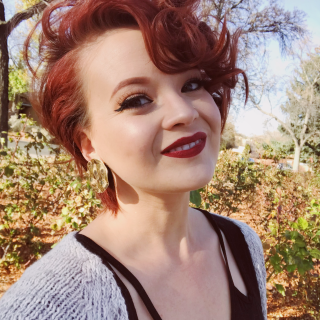 My name is Brittany and I am the Trying Too Hard Beauty. I have loved beauty and fashion for as long as I can remember. After years of coxing from friends I am trying my hand at a lifestyle blog. I hope you enjoy my experiments and adventures! XO ~Brittany

There was an error retrieving images from Instagram. An attempt will be remade in a few minutes.

Hello Everyone and Welcome back to my blog! In this post I will be introducing my DIY segment. This week I will be trying corn starch nails.

Let me start by saying I have a love/hate relationship with fake nails. I go through phases of wanting the beautiful long nails I see all over my pinterest and instagram, and then go through phases of saying F these fake nails. Let’s be honest here, fake nails are expensive and there is a lot of debate on how healthy they are for you. But Damn! How they can look so good! Fake nails make your fingers look so long and beautiful that it’s sometimes worth shelling out hard earned money and breathing in the dust of god knows what to have them.

I wore fake nails most of last year but haven’t worn them in the couple months to save some money. I’m a server. I work two jobs and money doesn’t come easy most days so I need to limit what I spend money on. When I saw tutorials pop up on my YouTube feed on creating fake nails at home with cornstarch, I jumped all over that.

The videos I watched boasted how these nails have changed their lives with how easy and cheap these nails were to create and how they lasted just as long as the nails you paid for in the salon. I like to think of myself as someone who doesn’t easily buy into miracle claims. Well that’s not true. I believe a lot of the things I see out there. Especially when it comes to beauty hacks. I immediately ordered nail tips on amazon, bought cornstarch, and proceeded to spend the next SIX HOURS of my life on these diy cornstarch nails.

At first I tried the dip powder nail method. First glue nail tips to the natural nail, use a nail file to file and shape. Then apply clear nail polish, then dip the nail in a bowl of cornstarch, and wipe excess cornstarch off with a small brush. Simply alternate between applying clear nail polish and dipping into the cornstarch until desired thickness is reached. It took me about four layers until I felt like my nail looked like it didn’t have a tip glued on. My nails looked uneven and lumpy. This can be solved by buffing the nail so they are smooth and even, which I would have gladly done, IF THEY EVER DRIED!! After an hour of waiting for the nails to dry, I had to call the experiment off so I could begin cooking dinner for the craft night my friend’s and I have once a month. This whole process lasted a good two and a half hours and was so messy! Cornstarch was everywhere and the clean up was not worth it.

When I attempted to tackle the nails again, I do not give up easy, I tried a method similar to how they apply acrylics in the salon. Like above, glue nail tips onto the natural nail and use a nail file to file and shape. Next, pour clear nail polish onto a piece of tinfoil and mix in cornstarch small amounts at a time until a glue like consistency is formed. Basically it’s like making a cornstarch paste that can simply be painted on with the brush from the clear polish. The nails came out so much smoother and even with this process, and amazingly enough, actually seemed to dry. I also dunked my hands in a bowl of ice water to help with the drying and hardening process. I was actually able to get to the point where I was able to apply colored nail polish. Let me tell you, I was not mad at the final outcome. My nails looked great! It did take a good three hours for me to reach this point, but it was worth it! This way was so much cleaner and easier that I honestly believed it had worked! No. It did not work. Two hours after finishing my nails, they got messed up. They got messed up bad. The cornstarch paste had never hardened so they had a putty-like finish that kept getting dented, moved around, and finally got wiped off when I went to put a jacket on to run to the store. I threw in the towel at this point, said F it, and just took all the putty nails off.

At the end of the day in my God’s honest opinion, these nails do not work. These nails are not easy, they don’t turn out nice, and they do not come anywhere close to lasting as long as the nails you pay for. This is not the holy grail DIY nails you have been searching for. Just learn from my mistakes, and do not go down this long dark road. However, if you would like to try to get these nails to work, here are the two videos I found to be most helpful:

Have you tried these nails? Let me know if they worked for you!

Thank you for reading, and remember, Let’s All Try Too Hard! Even if the outcome isn’t what you were hoping for!